skip to main | skip to sidebar

Here's some I made earlier!

My sister did the Race For Life last Sunday. It's the first time I've ever known her do something like this so I am immensely proud of her. As I had to send her my sponsorship money, I decided to make her a card and a little pressie! 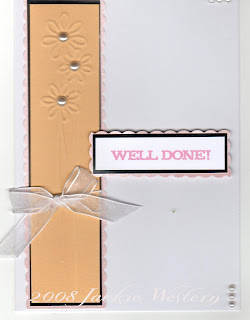 Another one of my quick and simple cards using a new Cuttlebug embossing folder. This time I used an embossing strip and they are lovely. I bought two sets and may have to go back for the other ;) All I added was a few diamantes and a bit of organza ribbon! The greeting was done on the computer. 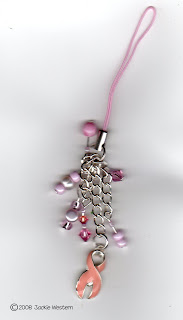 I used a mix of pink beads to make the phone charm including some pink Swarovski crystals and finished it off with a Breast Cancer awareness charm.

I also made a card for a lovely friend's equally lovely son who is 21 today. Happy Birthday Simon! 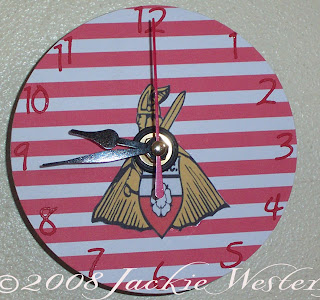 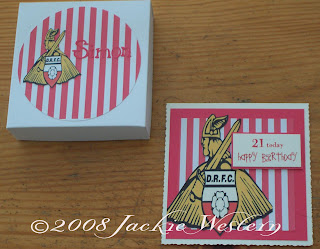 Simon is an ardent Doncaster Rovers fan so I decided to make him a cd clock! Note the matching card and box in the second picture...............I've mounted the Viking on the wrong way round, the stripes should be horizontal not vertical! *silly me*

My cousin is 50 on Monday so this is her card. I also managed to fit it in with a challenge on a blog that I came across the other day whilst mooching around the net. The blog is called 2 Sketches For You This is this week's sketch 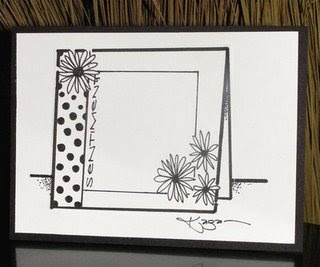 and here is the card I made 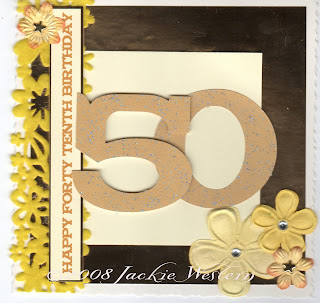 The numbers were cut on the Robo out of a lovely gold glitter card and mounted onto a cream mat then one cut from gold mirri card (which don't show properly as I had to scan the card instead of photographing it) The floral ribbon down the side is from Ribbon Oasis the flowers are Prima and the sentiment was done on the laptop again.
The next card is another part of another commission 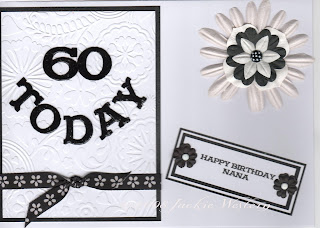 The white card was embossed using the Floral Fantasy Cuttlebug folder (can you tell I'm a fan? LOL) The large numbers and letter were cut on the Robo again using MADFONT -I love it at the moment - the ribbon is Papermania, the flowers are Bazzill and Prima and the sentiment was printed on the pc. I really love black and white! I have another card to do and that order is finished. :)

My next card was made for a very dear friend who was 60 on Thursday. It was also the first anniversary of the flooding in Toll Bar (just outside Doncaster) and john and his wife Anne live there. That was nothing to do with the card, I just thought I would throw it in for good measure LOL. 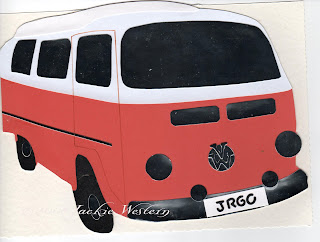 John and Anne used to drive a VW Camper van (albeit a long time ago) and named it the Wally Wagon. DH and I went out a couple of weeks ago and there was a classic car exhibition on so we took some photos. I enlarged this one in Photoshop and used it as a template for the front of the card which, as well as paper piecing it, I actually cut round it to shape the car front. I couldn't photograph it again as my camera was up at the hotel. The windows, lights, bumper etc are all cut from silver mirri card and it looks much better in real life! The card also fits a challenge which I found on Funky Fairy's blog I came across the blog this morning via one of their newsletters. There are some lovely freebies on the site as well as pretty papers and alphas to buy as downloads. Take a look, you might just have to buy :)

This week also saw my last week as Guest Designer on Di Hickman's blog Thanks doe having me Di, I thoroughly enjoyed it. 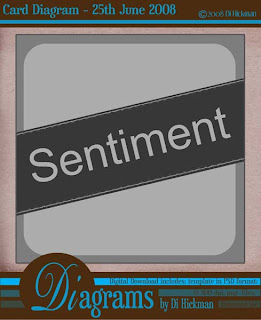 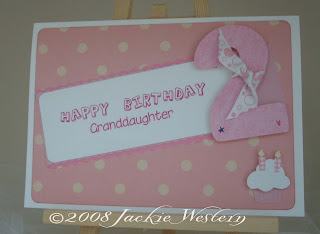 The papers are by K & Co, the large number was cut by hand from one of the papers by the English Paper Company, the cupcake is a Sizzlit die, the ribbon is from my stash (as I can't remember where it came from and the greeting was computer generated.

Wow, you have been busy: What a great and varied selection of cards!

Thanks for joining in the Funky Fairy Challenge with the Camper Van :)

Wowser you have been busy. What a wonderful range of cards!

I love the sentiment on the 50th card - too funny. So glad you came and along and played with us at 2 sketches 4 you this week :)

Very pretty! I love the colors you used!
Laura

Hey what a great card! Very funky!!! and a brilliant way of doing a shaped card - VW camper vans are so cool.

Lots of cute projects!! Great job with the sketch at 2 Sketches 4 U!

Many thanks for joining in with the Funky Fairys this week.

Jackie
My name is Jackie and I'm a Craftaholic :))

Promote Your Page Too 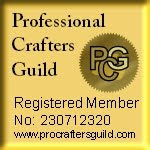 Whilst I love being able to showcase my work and all the lovely comments received, I would be very grateful if you didn't copy it. Please feel free to use any of my stuff as inspiration but I really wouldn't like to see it appear on any other site or as competition entries in magazines without my permission. My work remains my 'intellectual property' at all times.

I love designing for

Honoured to design for 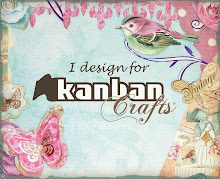 Where can you see my work? 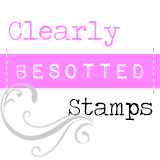